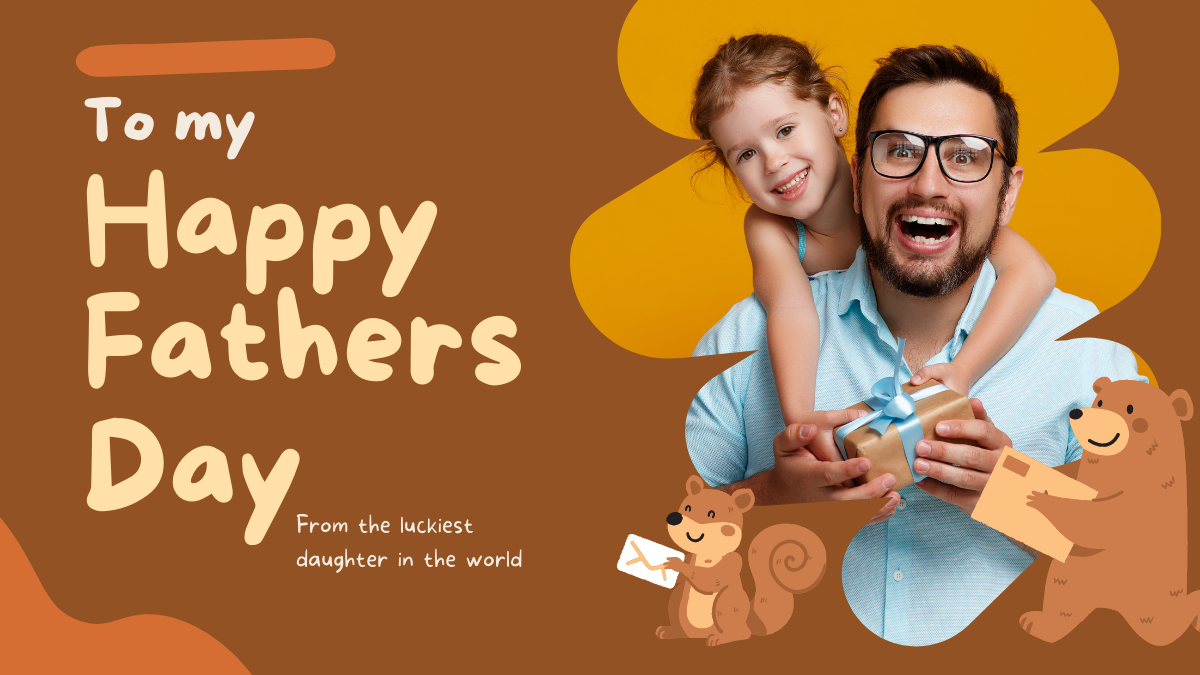 We all celebrating Mothers day every year, but there is also a Fathers day we also celebrating every single year in the month of June. On this day Every Son and daughter celebrate highly of fathers day to thank their father to be with them, help them in every situation and always provide them a Good life. Entire family celebrates this day with full joy and enthusiasm. But do you know that How fathers day was started and Why Evveryone of us celebrating it. So let’s know:

Every year the third week of June is celebrated as Father’s Day in honor of the father. Father is like a Tree that shading to our lives that carries all the burdens and looks out for his family.

This is the day to express our respect towards the father. In our life, our father is like the shade of a tree. Whenever problems come on the children, the father removes their problems and gives them relief.

A father is not only a father but also a role model, friend, guide and hero for his child. As mother gives life, similarly our father teaches us the meaning of that life. He also saves children from troubles and also teaches them to fight with them. It is impossible to describe the importance of father in just a few words, but we can definitely express our love, respect and respect towards him.

Father’s Day is a holiday celebrated annually on the third Sunday of June in many countries around the world. The holiday was first observed in the United States in 1909, but it has roots dating back to the ancient Roman Empire.

The modern holiday of Father’s Day was inspired by the work of Sonora Smart Dodd, who sought to honor her own father and other fathers in her community. Dodd’s father was a Civil War veteran who had raised six children on his own after his wife died in childbirth. Dodd felt that fathers should be recognized for their contributions to their families and worked to establish a holiday to honor them.

The first Father’s Day was celebrated in Spokane, Washington on June 19, 1910. The holiday was not officially recognized by the U.S. government until 1972, when President Richard Nixon signed a bill proclaiming Father’s Day a national holiday.

Happy Fathers Day 2023: Father’s Day was first celebrated unofficially in the year 1907 in America. While officially it started in the year 1910. However, there are differences among experts regarding the date of celebrating ‘Father’s Day’. According to historians, this day was started by Sonora Smart Dodd. In fact, when Sonera was young, her mother died, and father William Smart gave her the love of both mother and father. Seeing his father’s love, sacrifice and dedication, he thought of celebrating ‘Father’s Day’ on the lines of Mother’s Day.

After this, on June 19, 1909, Dodd celebrated Father’s Day for the first time. At the same time, in the year 1924, the then US President Calvin Collie approved Father’s Day. Four decades later, in 1966, President Lyndon Johnson announced that Father’s Day would be celebrated on the third Sunday of June every year. An official holiday(Fathers Day) is given in America on this day. Happy Fathers Day

Today, Father’s Day is celebrated in many countries around the world and is an opportunity for children to honor their fathers and for families to come together and celebrate the important role that fathers play in their lives.

Why Fathers day been Celebrated?

Father’s Day is a holiday that is celebrated annually on the third Sunday of June in many countries around the world. It is a day to honor and appreciate fathers and the important role that they play in the lives of their families.

The holiday was first celebrated in the United States in 1909, inspired by the work of Sonora Smart Dodd, who wanted to honor her own father and other fathers in her community. Dodd’s father was a Civil War veteran who had raised six children on his own after his wife died in childbirth, and Dodd felt that fathers should be recognized for their contributions to their families.

Every year on this Day(Happy Fathers day), Children give a Big Thanks to their father and give lots of surprises to give them a big surprise and a great respect. Children gave their father a Gift of his favorite one and make them feel a Great love and emotional.

The first Father’s Day was celebrated in Spokane, Washington on June 19, 1910, and the holiday was officially recognized by the U.S. government in 1972. Today, Father’s Day is celebrated in many countries around the world and is an opportunity for children to show their love and appreciation for their fathers, and for families to come together and celebrate the important role that fathers play in their lives.

How did Father’s Day get recognized as a festival?

Over the years, Father’s Day festival has gained amazing popularity. Today it is considered a secular festival and is celebrated not only in the US but also in large numbers around the world, including Argentina, Australia, Belgium, Brazil, France, Norway, Germany, New Zealand, Japan and India.

How do children celebrate Father’s Day?

Small joys also deepen the relationship between father and children. Children to show gratitude and love for father;

What is the importance of Father’s Day in the life of children:

Happy Fathers Day: Along with mother, father also has special importance in the life of children. That’s why for a child, his father also holds a special place in his life. Fathers work hard day and night for the bright future of their children and only then they are able to fulfill the dreams of their children. That’s why children celebrate Father’s Day to pay respect to their fathers, to express their gratitude towards them.

That is, no matter how many mistakes the child makes, the father never feels bad about him, that is, forgives all his mistakes and loves him equally.

Here we are providing some of the Best Fathers day quotes which you can Give your father a Gift with, and make their day more beautiful and memorable🤗:

Fathers Day Quotes By Some of Knows :

Father: Respected for his wisdom. Appreciated for his strength. Admired for his love. —Barbara Loots

Of all the gifts a dad can give his kid, maybe the best one of all is a good example to follow. —Joey Benevento

Dad hugs are strong hugs that can say so many things, like “I’ve got you. I’m always right here. And I’ll always love you.” —Melvina Young

A dad’s job is to lift his daughter up so that one day she will rise on her own. —Catherine Hollyer

A daddy can’t teach a little girl everything, but he teaches her to believe in herself, to never give up, to work hard. And that leads to pretty much everything else. —Andrew Blackburn

Wanting to be just like Dad—it’s a daughter thing, too. —Keely Chace

A father holds his daughter’s hand for a short while, but he holds her heart forever.

Father’s love, care, and protection always remain as a pillar of strength throughout our lives. Happy Father’s Day!

Fatherhood is the most crucial responsibility and yet the greatest adventure one can experience. Happy father’s day.

Happy father’s day. Let us practice fatherly love not only towards our children but also to every human being.

Fathers are like candles. They make daylight out of the darkness. A father is someone who is concerned with everything we do.

I love my parents a lot. Even if they can be annoying i know they want the best for me.

A father works silently without expecting any praises just for his family.

A Father understands what a child does not say.

A mans work is from sun to sun, but a Father’ss work is never done!!

A good father is a man who buys your toys, before he buys his.!!

My father believed in me and this is the greatest gift anyone could give another person. Happy Fathers Day.

So, Here we Strognly hoping that After reading this Big giant lovely article about Fathers day, you have now get known about the Sacrifices, Love, Respects and Better life the Father gives us, the Importance of Father and Fathers day that How Fathers day has so much meaning and why we have always be thankful to our fathers. If you really like this article then please share this to all of your friends and relatives. and if you are reading this on fathers day.. then Happy Fathers’ day to all!!