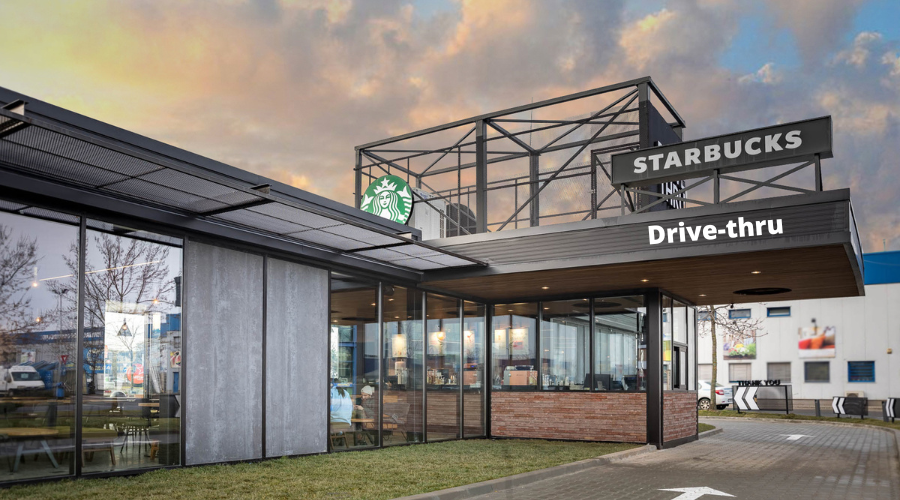 Starbucks drive-thru store designers are developing experiences that respect the uniqueness of the communities in which they operate while making sure they satisfy the changing needs of customers throughout the world through more than 18 in-house studios spread across the globe.

The company’s most recent innovation was inspired by the scene outside its Seattle headquarters: a bustling port with enormous stacks of cargo containers from all over the world overlooking the Puget Sound.

Starbucks wanted to discover a method to repurpose containers into an inventive store design since it recognised that its supply chain depended on similar containers to distribute coffee and tea.

What is unique about the Starbucks store?

Starbucks store designers are developing experiences that respect the uniqueness of the communities in which they operate while making sure they satisfy the changing needs of customers throughout the world through more than 18 in-house studios spread across the globe.

In 2013, with sites now operating in Salt Lake City (with its smallest drive-through to date at 386 square feet) and Denver, Starbucks was starting to scale the modern modular Starbucks drive-thru idea to additional cities throughout the United States. Due to its smaller size—less than 1,000 square feet—and faster delivery and installation than typical stores, the store allows the company to grow into previously insufficient areas for one of its more conventional stores. This Starbucks video documents the entire assembly process.

The specialisation of Starbucks drive-thru

Starbucks maintained its position as the market leader despite the food and beverage industry’s rapid change by paying attention to consumer preferences. A fundamental tenet of the “My Starbucks Idea” concept was that customers know what they want. Because of the company’s dedication to this notion, fans submitted over 150,000 proposals, of which hundreds were implemented.

Furthermore, these proposals weren’t only commonplace and included public favourites like hazelnut macchiatos.

The platform, however, generated proposals for process improvements and suggestions for new products, such as tweaking Starbucks’ mobile payment methods and providing free Wi-Fi.

What are the benefits of Starbucks drive-thru?

Portland, Oregon, now boasts Starbucks’ newest location. By incorporating the requirements and practises of the bicycling community into the site, the modern modular drive-through furthers the dedication to creating local relevance. Customers can cycle up to the business and enjoy a nice cup of coffee in the sizable outdoor area while still being able to keep a close eye on their bikes, thanks to a unique custom bike rack feature that was launched last week by a Dutch biking firm called Urban Racks.

Director of concepts Anthony Perez recently said in an interview with The Oregonian, “When trying to design this retail shop for Portland, our in-house engineering team considered a wide range of factors, including the city’s world-famous biking culture, mild climate, pet-friendly neighbourhood, communal sensibilities, and citizens who place as much significance on sustainable development as we do. Of course, Portlanders also enjoy their coffee.

Many of these contemporary modular buildings also feature environmentally friendly features, such as xeriscaping and cladding made of recycled materials like old snow fencing from Wyoming or Douglas fir from an old dough mixer in eastern Washington. One of many ways Starbucks drive-thru uses its worldwide scale for good is by being able to market these kinds of designs.

Additionally, Starbucks is finding methods to apply the knowledge it has gained from this initiative to other endeavors, such as prefabrication projects and the development of outdoor furniture and accessories. In the upcoming month, additional such outlets are expected to open in Virginia Beach, Virginia, Chicago, Casper, Wyoming, and Federal Way, Washington, extending Starbucks’ ability to provide significant chances for replication and expansion.

What is “My Starbucks Idea”?

Check Out the following infographic, which was released in 2013, for a better understanding of the variety of innovations contributed through the “My Starbucks Idea” platform:

These instances highlight the advantages of open innovation. Starbucks was able to tap into a lot of crowd innovation by giving customers control over the process and by providing them with a reason to engage by praising their ideas.

It is therefore evident that the “My Starbucks Idea” platform generated a significant amount of worthwhile product innovation. What were the advantages of this experiment on a larger scale, though, besides just introducing new drink flavours?

What are some illustrations of Starbucks drive-thru?

The drive-thrus at Starbucks have been the subject of numerous articles. Not too surprisingly, that. After all, Starbucks’ drive-thru quickly transformed from an everyday, vanilla customer experience to a highly calibrated, high-quality, brand-proprietary drive-thru that has brought millions upon millions for the chain in less than ten years. Starbucks is succeeding in a lot of areas. You could even say that it received top billing at the drive-through. Drive-thru sales increased by more than 10% from pre-pandemic levels in the second quarter, according to a recent announcement from the company. And in the future, it will serve as an anchor for expansion, particularly in suburban locations.

But none of the earlier papers detailed all the factors combined to produce these outcomes. Therefore, we provide the “secrets” behind Starbucks’ success in this post. And while doing so, give the readers a road map for launching your company’s drive-thru.

Chief Financial Officer Scott Maw made his case for the Starbucks drive-thru strategy on a recent conference call by using the example of two Starbucks in Fort Collins, Colorado. One is a drive-through in a retail mall, and the other is one not far away. According to Maw, the cafe that served clients in their automobiles saw a two-third increase in sales.

According to estimations by Tom Cook, director at restaurant adviser King-Casey, who has worked previously with Starbucks, 70% of sales at restaurants with car service come through the windows. He claimed that a tiny percentage of the chain’s patrons stay inside.

Starbucks was aware that its drive-through was subpar in 2009. It acknowledged that the business had not viewed the drive-through experience from the perspective of the customer; bucks places a strong emphasis on providing customers with a variety of touch points along their path to purchase. At the entrance, advertising posters and windows cling with suggestive sales messages before the order point. In addition, a trial for a seductive pastry case is called. The interior experience also involves direct interaction with the barista, music, furnishings, and smells. These customer touchpoints, however, were essentially nonexistent at the drive-thru.

In 2010, Starbucks management began to examine the drive-thru closely. More than 2,400 locations had drive-thrus, accounting for 40% of its total inventory. Additionally, 40% were responsible for more than 50% of the brand’s financial contribution. Therefore, the possibility of expanding this area of the company seemed appealing.

The group was aware of prospects for immediate improvement to be taken advantage of the chance. Any changes bringing them closer to best practices seemed destined to produce positive changes in the company’s performance. The team believed this would be an effective growth strategy for Starbucks if it could have beyond just catching up to best practices. However, a colossal barrier was standing in the way of making progress.

The drive-through did not yet pique the C-curiosity. There was a perception that the drive-through portrayed a fast food establishment and “that’s not Starbucks” (even though the brand is fast casual). Consequently, a cultural barrier made significant advances impossible to finance.

The team’s path to triumph was paved with a crucial opportunity due to this challenge. The improvement team had to make a strong case for why the drive-thru was essential to the brand’s expansion to get the backing and funding they required from upper management. Initial upgrades to bring some current drive-thru outlets up to best practices were planned. Using “the language of top management” or the language of money, the team would keep track of the outcomes, communicate them, and establish “evidence of the requirement.”

Despite having started building drive-thru locations years ago, Starbucks is now stepping up the effort as sales growth at its 14,000 U.S. cafes slows. Additionally, the business has worked to improve the experience for consumers that rely on cars. For instance, it began featuring baristas’ faces on outside video displays in 2015 and has already put 2,800 of them nationwide.

A recent Thursday saw a wait of almost six minutes for a drive-through order of coffee, tea, and a peanut butter cookie in Chicago. Six automobiles piled up in the line during the wait, demonstrating how keen the customers were.

Starbucks Drive-thru is essential for generating traffic; the challenge is getting people through, according to Edward Jones analyst Brian Yarbrough, at times