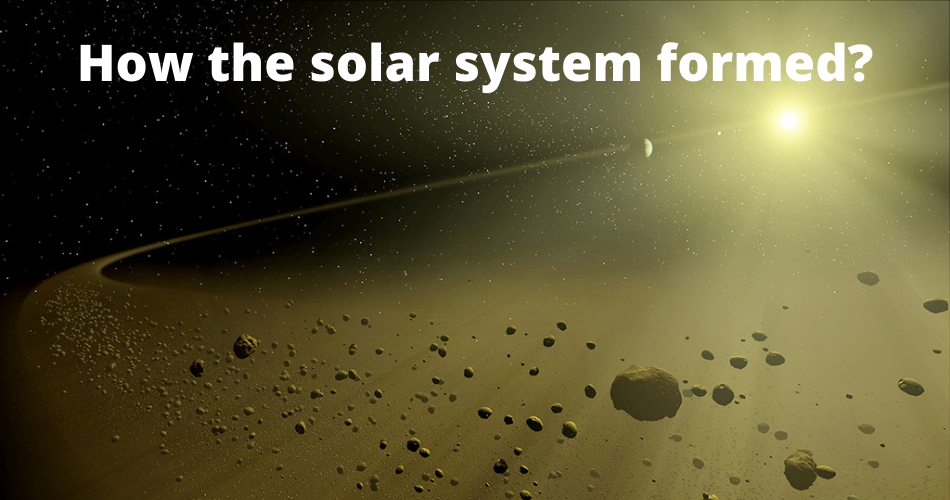 How the solar system formed?

in how old are stars we found that the sun  will burn hydrogen for 10 billion years. but because the sun is a field star we could not determine. how long ago the hydrogen burning started in how old is the earth moon system.

we found that the oldest solid earth and moon material was 43 billion years old. but we could not determine the age of the earth from its original start because the giant impact turned. the mantle to magma in this chapter well cover.

we have the sun at the center and four relatively  small rocky planets in the inner solar system and four much larger gaseous planets in the outer solar system. they are all   in nearly circular orbits and they  are all in the same orbital plane. none of the planets are orbiting outside the plane  like some comets asteroids and dwarf planets do   our theory of planetary formation  will need to explain these facts in our how older stars segment wave covered.

Also read || Scale of the galaxy

how the circumstellar disk feeds the central   object leading to the formation of proto stars  tottari stars and eventually fully formed   helium fusion burning stars the process  from the beginning of the proto star phase  to a fully fledged star is estimated  to take from 1 to 200 million years.  during this period the debris  in the disk is forming planets   in the nucleosynthesis segment of the lambda cold dark matter big bang theory chapter.

we covered the content of clouds like  these for the first generation of stars.   at that time it was limited to hydrogen some  helium and just traces of beryllium and lithium planetary nebula form when  normal stars run out of hydrogen.  the violent process created pressures  and temperatures large enough to fuse hydrogen and helium into heavier elements  and eject them into the interstellar medium from which giant molecular clouds. like this are formed these include carbon nitrogen and oxygen along with even smaller amounts of  heavier elements.

like silicon sulfur and iron but this kind of star transition does not have  energy to fuse enough protons to create atoms larger than iron supernova explosions occur. when  supermassive stars run out of hydrogen these seed   even heavier elements into the interstellar medium  like lead zirconium silver tungsten.

and gold but even at these extreme energies it is unlikely  that a supernova could produce elements larger than lead. this is because of the repulsive force  of light charges is so strong the coulomb force creates.

Also read || what is shooting star

the coulomb barrier you may recall  from our last chapter on how older stars.   that a proton in our sun can collide a trillion  times a second with other protons and still not   fuse for a billion years. but neutrons have no  charge and their fusing has no such barrier.

its understood  that neutron star mergers are the origin of the majority of all the heaviest elements found throughout. the universe for our collapsing cloud we know that it contained all 94 natural  elements. because we find them here on earth 99 of the mass of the circumstellar disk  is in the form of gas with just one percent.

in the form of dust the solid dust has little  effect on the star formation but its key   to planetary formation dust is the only solid grains available for growing planets   dust itself cannot be formed directly from purely  gaseous material at the low densities found in   interstellar molecular clouds.

instead solid  grains are known to form in planetary nebula supernova and in the outer  atmospheres of cool supergiant stars.

the dust in the interstellar medium extinguishes  light from stars by absorption and scattering.   the scattering leads to emissions of their own  comparing dusty clouds to nonduty clouds using   spectral absorption and emission lines shows.  that almost all the iron magnesium silicon   much of the carbon and some of the oxygen  and nitrogen are contained in the dust this makeup is similar to the terrestrial  amorphous nanocrystalline rocks.

if the temperature permits they are  surrounded by a mantle of water ice. the original dust grains in the cloud are  no longer available for direct observation   but to this day. there are similar objects in our  solar system called interplanetary dust particles. they are being collected in the thermosphere  by the international space station.

here’s an electron microscope view of one of them   its 10 micrometers in length. that’s around  100 times larger than interstellar dust nasa also uses high flying aircraft to collect  dust at high altitudes.

before it gets close enough   to the surface to mix with earth elements in 2018  a team of scientists from the university of hawaii   examined this dust with electron microscopes. they mapped the element distributions and   discovered that these glassy grains are made  up of sub grains that aggregated together   prior to the formation of the comet.

the  interplanetary dust particles came from   these represented samples of  the early. interstellar dust is the base material for planet formation   the dust grains run into each other and  stick forming larger and larger grains mixing   compounds and eventually forming mineralrich  pebble sized objects that grow to bolder size.

japan landed rovers on this asteroid in 2018. you can see the rubble nature of the object  with this picture taken from the surface   by the time enough matter has accumulated into  objects like these.

we have what astronomers call   planetesimals these can extend from several to  hundreds of kilometers in diameter comet 67p visited by the rosette mission in 2014. is thought  to be a combination of two planetesimals that   bound together in a slow speed collision.

their  combined mass is just under 10 trillion kilograms this is a rokoth it was discovered in 2014. out in  the Kuiper belt by the new horizons search team   using the hubble space telescope. this object  is 36 kilometers across thats 22 miles its   considered a minor planet like pluto, like  p67.

it has two lobes that collided slowly a close examination of the  surface shows lighter lines   separating sections of the lobe  these indicate that a rockhoth was built piece by piece by the coalescing  of over a dozen smaller planetesimals by the time this collide and merge process creates objects with enough mass to produce a   gravitational strength that exceeds the structural  strength of the rocks.

the star Fomalhaut is a good example of this  process its circumstellar disk morphed into a   protoplanetary disk with at least one object large  enough to be considered a planet formal help b over time these larger objects continue to  grow by accumulating matter from the disk.

we find that in each region each orbit each  distance from the sun everything coalesces   into one massive object these larger objects  sweep out the remaining debris in their orbits.   this is a defining characteristic for planets   all the little deviations averaged out  as the smaller particles with varying   elliptical orbits combined.

this explains orbits  being nearly circular and all in the same plane   but the actual process is very chaotic not as  simple and straightforward as this illustration the process of accumulating matter in the disc  into larger objects came to an end. when the sun   ignited as a main sequence star and its strong  solar winds blew away any remaining loose material   computer model estimates for how long this process  takes range from 100 million to 200 million years.

here’s a computer simulation created  by Caltech that illustrates. this chaos   planets interact with the rotating disk and lose  momentum moving their orbits closer to the sun  or gain momentum increasing their  orbital distance from the sun changing orbits create collisions between  planets moons form and collide with each other and with planets comets. and  asteroids form and smash into everything but out of this chaos we get our current order there is an expected difference between how this  works out for planets forming in the inner parts   of a solar system. and how it works out for planets  forming in the outer parts of the solar system   in the inner parts closer to the central star.

the  forming of planetesimals increased   as the objects began to  attract each other via gravity   objects grew to planet sizes and swept out.  the debris in the vicinity of their orbits the disc experienced a chaotic period of  collisions. that resulted in nine major   planet sized objects along with dozens of  moons and millions of asteroids and comets   in addition as the sun heated up.

the snow line  moved out to where we find it today just outside.   the asteroid belt this line separated the  four waterless inner solar system planets   from the five waterish  outer solar system planets. the giant impact hypothesis has a collision  between the earth and a mars sized planet.

liquefying the crust of both planets  and forming the moon from ejected matter based on uranium lead dating of zircon  crystals found in Australia. and on the moon   this happened 43 billion years ago that would be  200 million years after the original earth. formed given the mass of our sun we know that in the  beginning.

it had enough hydrogen to shine for a total of 10 billion years we now figure that.  it has been burning for 46 billion years.   therefore we can expect that it will burn for  54 billion more years before it runs out of fuel. we started with a giant molecular  cloud rotating around the milky way every 213 million years 26 000 light years from  the center.

it was seated with uranium around here a little over an eighth of a revolution from our  current position. it rotated an additional six and a half times before the cloud segment started to  collapse. here where we find the Perseus arm today it took only half of a revolution  more to form the entire solar system.   today we have a beautiful planet with a sun  that will sustain us for billions of years.